Johnson is a cultural strategist, researcher, and creative, born in Philadelphia, PA. Before coming to SPACE she was a curator at the Michener Art Museum and previously held positions at Vox Populi, Locks Gallery, the Penn Museum, Blind Spot magazine, and WPRB 103.3FM. She was an instructor at the University of Pennsylvania and Interlochen Center for the Arts, and has been a visiting artist and critic at colleges nationwide. In 2016, Johnson was awarded a grant from The Pew Center for Arts & Heritage in support of her independent project Making/Breaking the Binary: Women, Art & Technology (1968-85). The 2014 project, Thomas Chimes: The Body in Spirals was nominated for Best Exhibition in a Commercial Space Nationally by the International Association of Art Critics. In 2017, Kelsey was a Fellow at the Flaherty Film Seminar and is currently part of National Art Strategies' Executive Program in Arts & Cultural Strategy. When she's not working or getting outside she's passionate about volunteering for Planned Parenthood and serves on the Executive Committee of Sierra Club Maine. (Illustration by Annie Mok)

Thomas is a media and performance artist, film programmer, and arts administrator. A native of New England, she obtained her B.A. in Cultural Anthropology (minor in Film Studies) at Smith College, during which time, she was awarded both a Mellon Mays Undergraduate Fellowship and the Smithsonian Research Training Fellowship. Both awards allowed her to study the visual representation of culture in the U.S. and Africa before starting her career in the nonprofit sector. While completing her M.A. in Media Studies at The New School, she was an interview facilitator for StoryCorps—the Peabody Award-winning oral history organization—contributing to the collection at the Library of Congress and the National Museum of African American History and Culture. Later, she served as program manager at African Film Festival, Inc. (AFF) where she produced screenings at Lincoln Center, Brooklyn Academy of Music, Museum of Art and Design and other institutions across the U.S. and abroad before managing artist resources at New York Foundation for the Arts (NYFA). She joined SPACE after serving as the inaugural General Manager of Pioneer Works in Red Hook, Brooklyn.

Geneviève (GV) Beaudoin is a musician, writer, music curator, and arts administrator. Raised in a bilingual household in Maine, she went on to study at New York University and The Conservatory van Amsterdam. After several years working in theater in New York, she returned to Portland in 2016 where she quickly found herself among audiences at SPACE (... the rest is history). Driven by the Didion belief that "we tell ourselves stories in order to live," her freelance career has varied from curating music series and pop-up performances to magazine writing and developing new media in the health and sciences. With her band, Dead Gowns, GV released the 2018 EP, new spine, and regularly tours around the northeast. A recent pet owner, she aspires to be like the greats - a friend to all dogs.

Ian P. Hundt is an engineer, producer and musician with a varied background in studio, live and compositional sound. He moved to Portland in 2014 and quickly found his way to SPACE. On his first shift, he had one of the most powerful musical experiences of his life working with Tal National, and he has loved SPACE deeply ever since. Ian began his engineering career with a degree in Electroacoustics at Concordia University in Montreal, and has since worked in Nashville, TN, for several years with a focus on analog recording. He became SPACE’s Production Manager in 2017, and is thrilled to be working in Portland’s music scene. He is married to visual artist Amelia Garretson-Persans with whom he frequently collaborates. When not working at live shows, Ian can be found tinkering in his basement studio, playing piano or making dinner.

Peter's first ever night in Portland in October 2006 was spent at SPACE, where Wolf Eyes melted his face and destroyed his ears. He remarkably still had enough hearing to join the event staff as a sound engineer in 2010. He joined the staff upstairs in the office as music programmer in 2014. As a drummer, he has played more than 600 shows across North America, Europe, and Asia over the the past decade, with bands such as Woodpainting, Names Divine, Ora Cogan, Lina Tullgren, Yairms, Family Planning, Jacob Augustine, Lisa/Liza, Lady Lamb, The Casco Bay Tummlers, and more. He runs a small record label, Pretty Purgatory. His favorite color is purple.

Elizabeth is the Visual Arts Programmer at SPACE where she curates exhibitions, administers the Kindling Fund Grant and runs a residency program dedicated to highlighting the contributions of queer artists and artists of color. From 2014 – 2016, Spavento co-curated ALL RISE, a temporary, multi-disciplinary public art program that took place on an acre of vacant land in downtown Seattle. Previous curatorial projects include exhibitions with Disjecta Contemporary Art Center, Open Source Gallery, and Interstitial. She is the Co-Founder of Border Patrol, a curatorial collective and exhibition space that explores the intersection of contemporary art and corporate aesthetics.

​Lia Wilson is an arts writer and arts administrator. A Chicago native, she moved to Maine in 2015 to plant roots after years living in Brooklyn, San Francisco, and Santa Fe. Wilson has a background managing academic departments in art schools, first for California College of the Arts' Architecture Division and later for Pratt Institute's Art and Design Education Department. More recently she was the Communications Manager at the Portland Museum of Art during the institution's Your Museum, Reimagined initiative, a multi-year revamp project dedicated to expanding access to the museum's campus and collection. Wilson's writing practice is focused on elevating contemporary artists that examine the complexities of identity, visibility, and representation. Her research interests include the expanded field of Outsider Art and Self-Taught Art and the evolution of critical discourse surrounding artists with mental illnesses. She has a MA in Visual and Critical Studies from California College of the Arts and a BFA in Printmaking from College of Santa Fe. She currently lives in Portland with her partner and young son.

SPACE relies on a wide net of volunteers and friends. There are many more people involved with the operations of SPACE, and we regret that we can not list them all.

SPACE is a nonprofit organization that supports contemporary arts projects, champions artists, and encourages an open exchange of ideas. 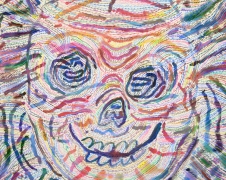