I Was Dreaming This 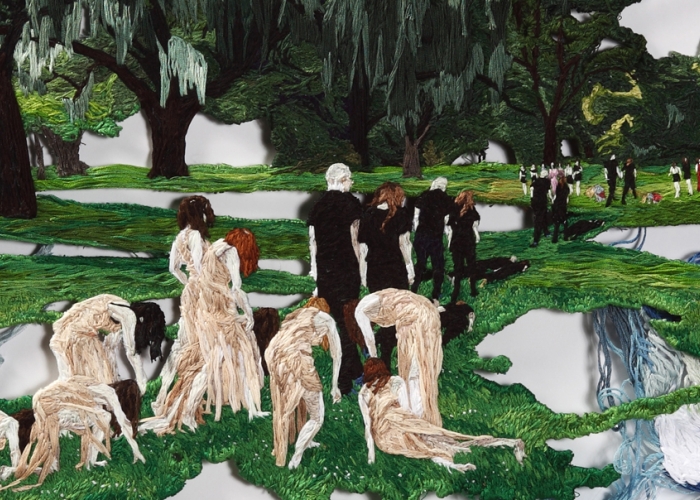 I Was Dreaming This is an exhibition of embroidered paintings by Providence, RI based artist Sophia Narrett. Sophia is a 2014 MFA Painting Candidate at Rhode Island School of Design, and is working on a body of work that encompasses painting, embroidery and sculpture. The surreal narratives that she creates with this work are at once playful and lighthearted, but infer beautifully dark undertones that lead one to question what is really going on.

There is a moment of transcendence in Willa Cather’s O Pioneers when Emil finds the married woman he’s in love with alone in an orchard. They had recently kissed for the first time.

When he reached the orchard the sun was hanging low over the wheatfield. Long fingers of light reached through the apple branches as through a net; the orchard was riddled and shot with gold; light was the reality, the trees were merely interferences that reflected and refracted light. Emil went softly down the cherry trees toward the wheatfield. When he came to the corner, he stopped short and put his hand over his mouth. Marie was lying on her side under the white mulberry tree, her face half hidden in the grass, her eyes closed, her hands lying limply where they had happened to fall. She had lived a day of her new life of perfect love, and it had left her like this. Her breast rose and fell faintly, as if she were asleep. Emil threw himself down beside her and took her in his arms. The blood came back to her cheeks, her amber eyes opened slowly, and in them Emil saw his own face and the orchard and the sun. “I was dreaming this,” she whispered, hiding her face against him, “don’t take my dream away!”

A few hours later they are shot by Marie’s husband, and bleed to death in the same orchard.

In a garden nature is choreographed to be a space of fantasy, opulence, and possible transcendence. Orchestrated nature can invite physical attempts to connect with the landscape or to access your own agency. If our bodies are physical manifestations of our consciousness, is motion or gesture intrinsic to experiencing a feeling? Is physical action just a depiction of an inner state or can it be a way of actually progressing through thoughts and emotions? If you lie down on top of that fallen tree will you feel better? What happens if you smash your head into some flowers?

I am asking whether loving someone can give meaning to life, and if a man or woman can replace religion for another person. Can romance, glamour, and eroticism be sublime? What does a visualization of desire, hopelessness, and denial become? Does it dissolve into sadness? What’s sad enough? When do things start getting away from you? What are we living for?"

Britta Konau reviewed this exhibit in the Portland Pheonix, take a look.