The Reluctant Radical and The Accidental Environmentalist

The Reluctant Radical and The Accidental Environmentalist 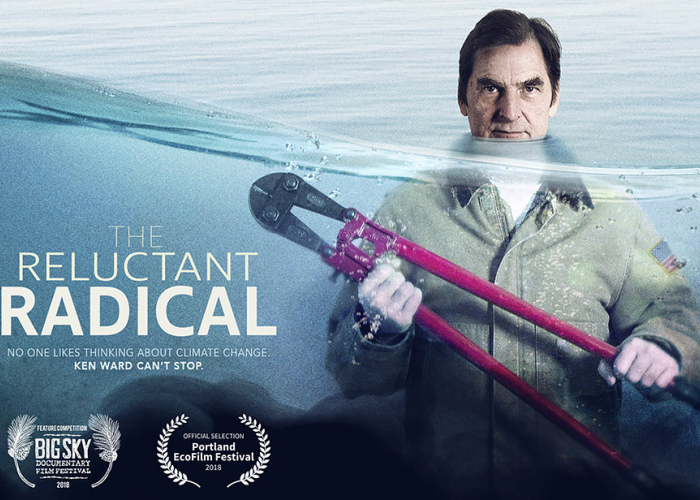 On Sunday evening, join us for the film The Reluctant Radical preceded by the short, The Accidental Environmentalist.

The Reluctant Radical follows activist Ken Ward as he confronts his fears and puts himself in the direct path of the fossil fuel industry to combat climate change. Ken breaks the law as a last resort, to fulfill what he sees as his personal obligation to future generations. After twenty years leading environmental organizations, Ken became increasingly alarmed by both the scientific evidence of climate change and the repercussions for civilization as we know it. Ken pushed for a crisis level response from inside environmental organizations. Those efforts failed, and he now embraces direct action civil disobedience as the most effective political tool to deal with catastrophic circumstances. The Reluctant Radical  follows Ken for a year and a half through a series of direct actions, culminating with his participation in the coordinated action that shut down all the U.S. tar sands oil pipelines on October 11, 2016. The film reveals both the personal costs and also the fulfillment that comes from following one’s moral calling- even if that means breaking the law. Ken Ward has no regrets, and his certainty leaves the audience to consider if he is out of touch with reality, or if it is the rest of society that is delusional for not acting when faced with the unsettling evidence that we are collectively destroying our world. Director Lindsey Grayzel, co-producer Deia Schlosberg and cinematographer Carl Davis were three of four independent filmmakers to be arrested and charged with crimes for filming the activists on October 11, 2016. Their charges have been dropped, and they have joined forces to tell Ken’s story through this film.

This film tells the story of John Wathen, whose personal brush with toxic chemicals transformed him from an average Alabama native to an internationally recognized environmentalist. The film was made in partnership with the Southern Environmental Law Center’s Southern Exposure Mediamaking Fellowship.

Founded in 1892, the Sierra Club is the oldest and largest environmental advocacy organization in North America. Their mission is to explore, enjoy and protect the planet. The Maine Chapter, celebrating their 25th year in 2018, is a volunteer-run grassroots organization, working to: