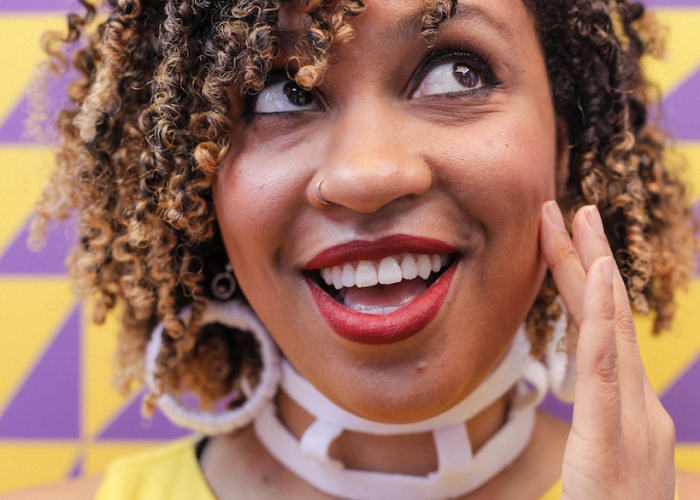 Miss Eaves is the feminist sound storm of Brooklyn-based multimedia artist Shanthony Exum. Her fierce femcee electro-pop-rap-dance-explosions celebrate confident women who aren’t afraid to love themselves and own their sexuality — all with a take-no-shit attitude that pushes back at the patriarchy, haters, and anyone else who tries to keep her down. And the world has taken notice: Miss Eaves has been lauded by The New York Times, NPR, Billboard, New York Magazine, Elle, Glamour, Jezebel, and more, with her viral sensation “Thunder Thighs” (OVER 2 MILLION VIEWS) landing on lists of feminist anthems alongside legends like Beyonce.

In 2014 Miss Eaves appeared on cuts by Tomderson (“Clak Clak“) & Mike Doughty (“Oh My God Yeah Fuck It“) and made her official debut the following year with Black Valley, a feminist riot grrrl nod created with her long time collaborator KEISHH. 2017 saw the release of her first full-length album, Feminasty, (also produced by KEISHH) which quickly became a favorite of the summer and included high energy, body positive hits like the previously mentioned “Thunder Thighs,” along with “Fuccboi Salute,” an anti-fuccboi anthem, and “Hump Day,” which was featured in season two, episode three (“Hella Open“) of HBO‘s hit show Insecure, starring Issa Rae. Her latest EP, ME AF, is slated to be released on August 3, 2018 and covers themes like living a happy single life and embracing your pubic hair.

​When she’s not turning out badass feminist jams, Miss Eaves can be found on tour alongside acts like Surfing Leons (Belgium), Wheatus, MC Frontalot and Tune Yards, killing the stage at SXSW, Tomorrowland, TomorrowWorld and Dour and Les Rockomotive, and creating anthems like “Barry & Joe: Bromance (Gonna Save The World),” which is the official theme for the upcoming Barry & Joe: The Animated Series, created by Adam Reid and executive produced by Conan O’Brien.

Not only a beat slayer, Miss Eaves is a paper mache addict and a bad-ass with a glue gun. A true multi-media junkie, she directs and art directs all her videos plus designs her own merchandise. Drawing inspiration from Frida Khalo, Michel Gondry, MIA, Santigold and Sia she is determined to show the world she is about that DIY life. MC Frontalot once told her: “You aren’t crafty…this is too well-made to be just crafty. You are a fabricator.” And trust, she will take you on a rollercoaster through her imagination.