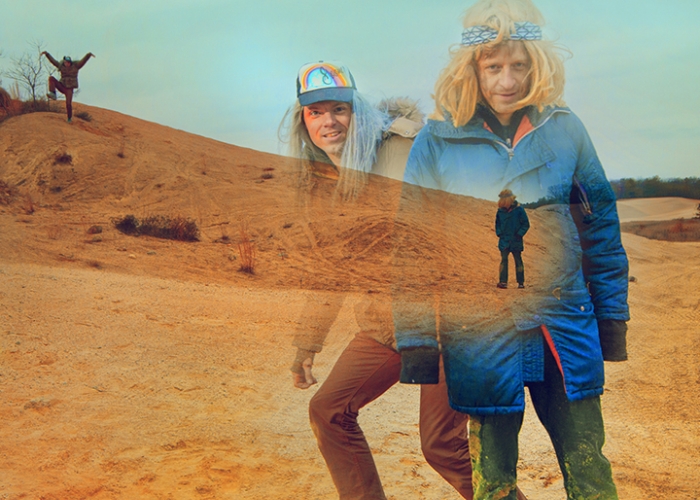 There is truly not one band we've tried harder to get to come to SPACE over these fifteen years. It's fitting that just a week after our 15th anniversary, Lightning Bolt will finally grace our stage. Quite the birthday present...

Over the course of its two-decade existence, Lightning Bolt has revolutionized underground rock in immeasurable ways. The duo broke the barrier between stage and audience by setting themselves up on the floor in the midst of the crowd. Their momentous live performances and the mania they inspired paved the way for similar tactics used by Dan Deacon and literally hundreds of others. Similarly, the band's recordings have always been chaotic, roaring, blown out documents that sound like they could destroy even the toughest set of speakers. Fantasy Empire, Lightning Bolt's sixth album and first in five years, is a fresh take from a band intent on pushing themselves musically and sonically while maintaining the aesthetic that has defined not only them, but an entire generation of noisemakers. It marks many firsts, most notably their first recordings made using hi-fi recording equipment at the famed Machines With Magnets, and their first album for Thrill Jockey. More than any previous album, Fantasy Empire sounds like drummer Brian Chippendale and bassist Brian Gibson are playing just a few feet away, using the clarity afforded by the studio to amplify the intensity they project. Every frantic drum hit, every fuzzed-out riff, sounds more present and tangible than ever before.

Fantasy Empire is ferocious, consuming, and is a more accurate translation of their live experience. It also shows Lightning Bolt embracing new ways to make their music even stranger. More than any previous record, Chippendale and Gibson make use of live loops and complete separation of the instruments during recording to maximize the sonic pandemonium and power. Gibson worked with Machines very carefully to get a clear yet still distorted and intense bass sound, allowing listeners to truly absorb the detail and dynamic range he displays, from the heaviest thud to the subtle melodic embellishments. Some of these songs have been in the band's live repertoire since as early as 2010, and have been refined in front of audiences for maximum impact. This is heavy, turbulent music, but it is executed with the precision of musicians that have spent years learning how to create impactful noise through the use of dynamics, melody, and rhythm.

Fantasy Empire has been in gestation for four years, with some songs having been recorded on lo-fi equipment before ultimately being scrapped. Since Early Delights was released, the band has collaborated with the Flaming Lips multiple times, and continued to tour relentlessly. 2013 saw the release of All My Relations by Black Pus, Chippendale's solo outlet, which was followed by a split LP with Oozing Wound. Chippendale, an accomplished comic artist and illustrator, created the Fantasy Empire's subtly ominous album art, and will release an upcoming book of his comics through respected imprint Drawn and Quarterly. Brian Gibson has been developing the new video game Thumper, with his own company, Drool, which will be released next year. And, of course, Lightning Bolt will be touring the US in 2015.

Opening the evening is the soul-crushing liturgical noise-balladeer Lingua Ignota and children of brutal sludge, spazz-jazz, and all-caps metal Cadaverette.