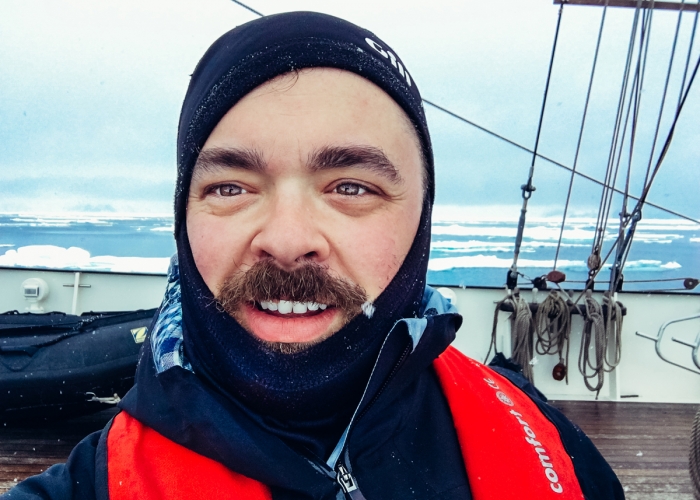 Justin Levesque's current window installation at SPACE, The Friction Coefficient of Ice Against Various Materials is from a connected network of distinct but related projects called PLACE/HOLD that concern Arctic image consumption, data as the new divine, spatial simulacrum and corporeal complexity.

During his talk, Levesque will share experiences from The Arctic Circle artist residency, identify and discuss contributing factors to psychological climate paradox, and share additional works from PLACE/HOLD that demonstrate his interdisciplinary approach to the related projects.

In addition to discussing both images of climate and the climate of images, Levesque will contextualize his practice in relationship to living with the genetic bleeding disorder, hemophilia, and how he confronted this narrative within the remote Arctic landscape.

Justin Levesque is an interdisciplinary artist living and working in Portland, Maine. He received his BFA in Photography from the University of Southern Maine in 2010. Levesque is a Maine Arts Commission Artist Project Grant recipient (2015, 2017), and in 2015, was selected as one of thirteen emerging photographers under 30 in Maine by Maine Media Workshops + College's PhoPa Gallery. Levesque has exhibited throughout New England and nationally at Midwest Center for Photography in Wichita, KS; Terrault Contemporary in Baltimore, MD; and JanKossen Contemporary in New York City.

In 2015, he created an independent artist residency aboard an Eimskip container ship sailing from Maine to Iceland. In 2016 Levesque then installed a public art intervention in a shipping container about his residency with support from The Kindling Fund, an Andy Warhol Regional Regranting Program administered by Space Gallery.

In response to his work about Maine's emerging relationship to the North Atlantic and Arctic, he was invited to be a fellow of The Arctic Circle artist residency in Svalbard, just 10 degrees from the North Pole, in June 2017.