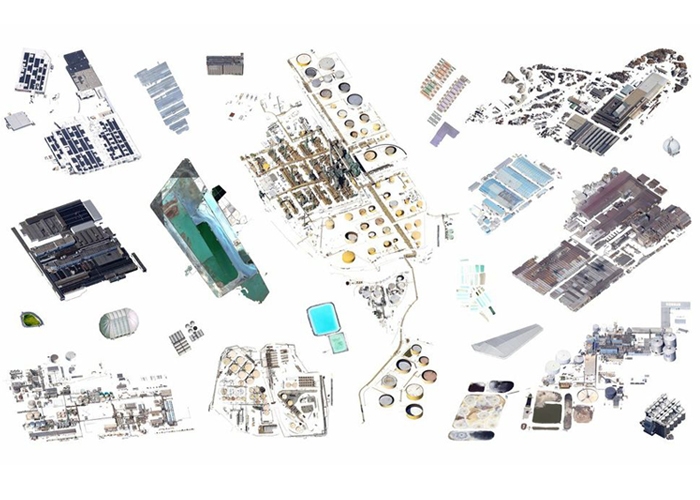 Come check out Long Distance in our main gallery and listen to artist Jenny Odell talk about her process:

"My work attempts to momentarily render humanity legible to itself by mining the surplus, latent value of secondhand imagery, mostly from Google Maps, but also from Youtube, Craigslist, and other sites. The value of this imagery has to do with the way the it happens to reflect us, obliquely and in a way more accurately than otherwise possible, in an environment so familiar it has become nearly invisible to us. The result is something like the most candid photo possible: we, and our world of things, are captured in an arbitrary moment by a mechanized camera on a satellite or on top of a car, or by a tourist who meant the photo to be of something else.

This shift in perspective can make visible to us the utter strangeness of everything, including ourselves. It creates a moment of openness, a temporary removal that allows us to see our world as the strange and specific place it has become, before the old familiarity settles back in. At best, this removal can effect what writer Walter Benjamin once described as 'blasting' an image from the historical continuum, in some cases allowing us to really see it for the first time.

To be able to see this way has broad implications. Speaking about dialectical images, Benjamin gave the example of seeing an image of a bomber plane superimposed on DaVinci’s original drawing of a flying machine -- which DaVinci, heartbreakingly in retrospect, envisioned using 'in order to look for snow on the mountain summits, and then return to scatter it over city streets shimmering with the heat of summer.' Such a superimposition enables the realization that history is not linear and that each moment of the past existed in a field of possibilities (as in the early stages of any technology). This kind of stereoscopic vision allows us to see through the idea that things turned out the way they did because they were destined to be this way. In other words, to reopen the field of possibility in the past is the reopen that same field in the future. At a remove from things so familiar we have forgotten to look at them, we can just begin to see it: all of the things the world has not become and, most importantly, all of the things it could become."