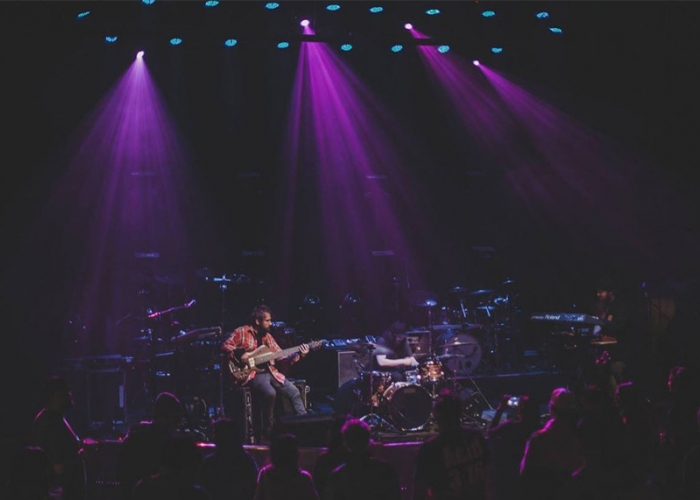 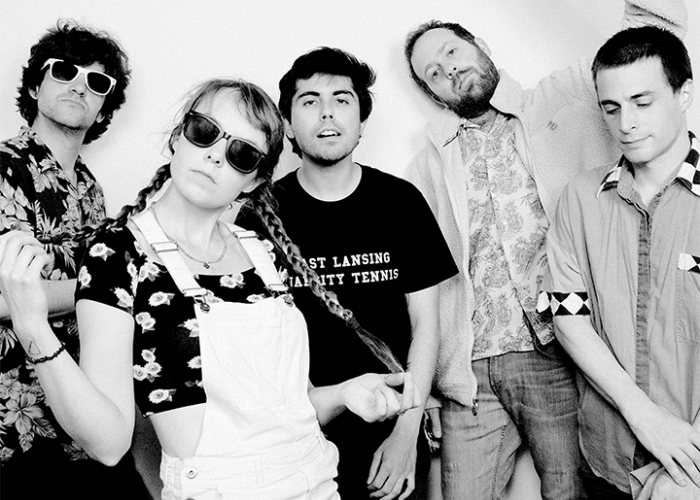 JAW GEMS, an electronic outfit from Portland, Maine, is a collective of experimental producers bringing beat-music – traditionally programmed and played on samplers – to a live band setting. Combine legendary beat-makers like Tokimonsta, Flying Lotus, and Dilla, with the deep gritty grooves of Thundercat, and Toro y Moi’s chillwave synth-pop, and you begin to approach the sound Jaw Gems creates. Since their start in 2009, the band has been exploring sonic and rhythmic ideas that emphasize interlaced melodies and hard-hitting slaps. The result is a harmonic workout for both the subconscious and neck. Electronic producer, Daedelus, says “Jaw Gems have done the magic trick of delivering thoroughly listenable instrumental [albums] that you can also sing along to.”

Outfitted with vintage, analog synthesizers sampled through a modern Roland sp404, a live drummer, and an electric bassist, Jaw Gems’ employ a variety of beat-repeating, sample-warping technology to design a sound which is commonly made by a solo artist. It’s this unique technique that caught the attention of acclaimed producer Daddy Kev, founder of Alpha Pup Records — home to many of the aforementioned artists. “I fell in love with Jaw Gems the first time I saw them perform,” says Kev. “I think they’re a perfect fit for the Alpha Pup label.” Jaw Gems will unleash a sonic spark in the shadows with the release their fourth album, Dim Kingdom, on Alpha Pup this March — Following up their recent works Heatweaver and Heatweaver Remixes with a big, expanding sound, and an intimate, calming intensity. Inspired by the band’s mood regarding the current state of America during recording time, Dim Kingdom represents a shifting stance for the group. “With this album, we searched to try and find some light in the darkness” explains keyboardist Tyler Quist. “Considering the events of the past two years, it’s not hard to detect a general feeling of low morale in the country. We made this music in the hopes that it could lift us and others during this time.”

Two years spent touring has also affected Jaw Gems’ musical style with optimism and a powerful lucidity, as they saw their performance environment change drastically from intimate settings to much bigger venues, including Red Rocks Amphitheater. “Playing our music on these stages with increasingly larger sound systems enabled us to craft songs to fit that territory.” shares drummer Dj Moore. “With Dim Kingdom, we were motivated to explore that inspiration and apply it to our sonic palette.” In addition to national tours and landing their dream record deal, other recent Jaw Gems’ highlights include shared stages with icons such as My Morning Jacket, Flying Lotus at L.A.’s legendary Low End Theory (FlyLo’s first appearance at the famed L.A. beat scene event in years), Pharoahe Monch, and many more.

Analog synthesizers give tangible life to the works of Guerilla Toss. Whether it be the sound of a rocket ship, a kitten-with-a-wah, distorted dolphins, or a clavichord made out of honey-baked ham, the band consistently finds new ways to bring together the many ideas that combine to shape each new batch of art-rock puzzle pieces.

Twisted Crystal, Guerilla Toss’ new LP, feels more personal than ever for the band.  Angular yet irresistibly catchy, this collection of pop songs pulls influence from powerful groups like The Slits, ESG, Gina X, and early Madonna, with sing-speak vocals from Kassie Carlson nodding to legendary artists like Laurie Anderson, Grace Jones, and Lizzy Mercier Descloux – combining this all into a twisted, crystalline concoction.

Oracles and enigmatic egos are common lyrical themes, but charismatic instrumentality springs the listener back to extraterrestrial comfort. Old favorite sounds ring true from the trusty Sequential Circuits Six Track Synthesizer and Clavia Drum Machine. New, more refined sounds are molded and polished by drummer/producer Peter Negroponte, whose passion for perfection and creation goes far beyond an all-consuming Tetris effect.  Peter has truly excelled on this new recording, creating a complex networks of beats and sound that become easily intertwined with the rhythmic fabric of life.

Raised in a devoutly religious family, vocalist Kassie Carlson started performing at the age of five. She often participated in large pastoral choral performances, as well as her family’s four-part harmony gospel quartet, making her no stranger to the stage. Growing up under the fear of God leaves a distinct footprint on your perception. An omnipresent male dictates not only your present waking life but also the rest of your eternity. Discovering a rock band was more than self-expression for Kassie, it was a manifestation of a self-healing temple, a personal pipeline for power. What better way to part the waters of toxic sludge than a matriarchal shout?

Keyboardist Sam Lisabeth paws the keys with distinct virtuosity and expressive sass. A new member, Stephen Cooper (of the band Cloud Becomes Your Hand), binds the group with an urgent, disciplined, and melodic style. The hypnotic, ostinato-like basslines and up front rhythm tracks guide and grip each song like gravity, keeping the listener from swirling off into the cosmos.

In albums past, Kassie’s performances resembled more of a manic, possessed high priestess; humming at the gates of hell, hacking telepathy and tugging the strings of every audience member. Twisted Crystal goes beyond this familiar darkness, leading us into a rhythmically calming charm with deep wisdom, serenity, and understanding. What is a twisted crystal? And who told you it would heal?

At times the listener wanders through mazes of dizzying, alternately pulsing time signatures, but the roads always bounce, meet and magically snap back together. That meditative groove, both live and in the studio, has become signature for Guerilla Toss, drawing deep influence from 70s krautrock and experimental rock music like Tom Tom Club, Talking Heads, Brian Eno, Neu!, Cluster, Todd Rundgren, and La Dusseldorf.

“Magic is Easy. Hypnotize yourself well.”