A Game Of "My Grandmother’s H.O.R.S.E." with Amiright? by Jake Lichter 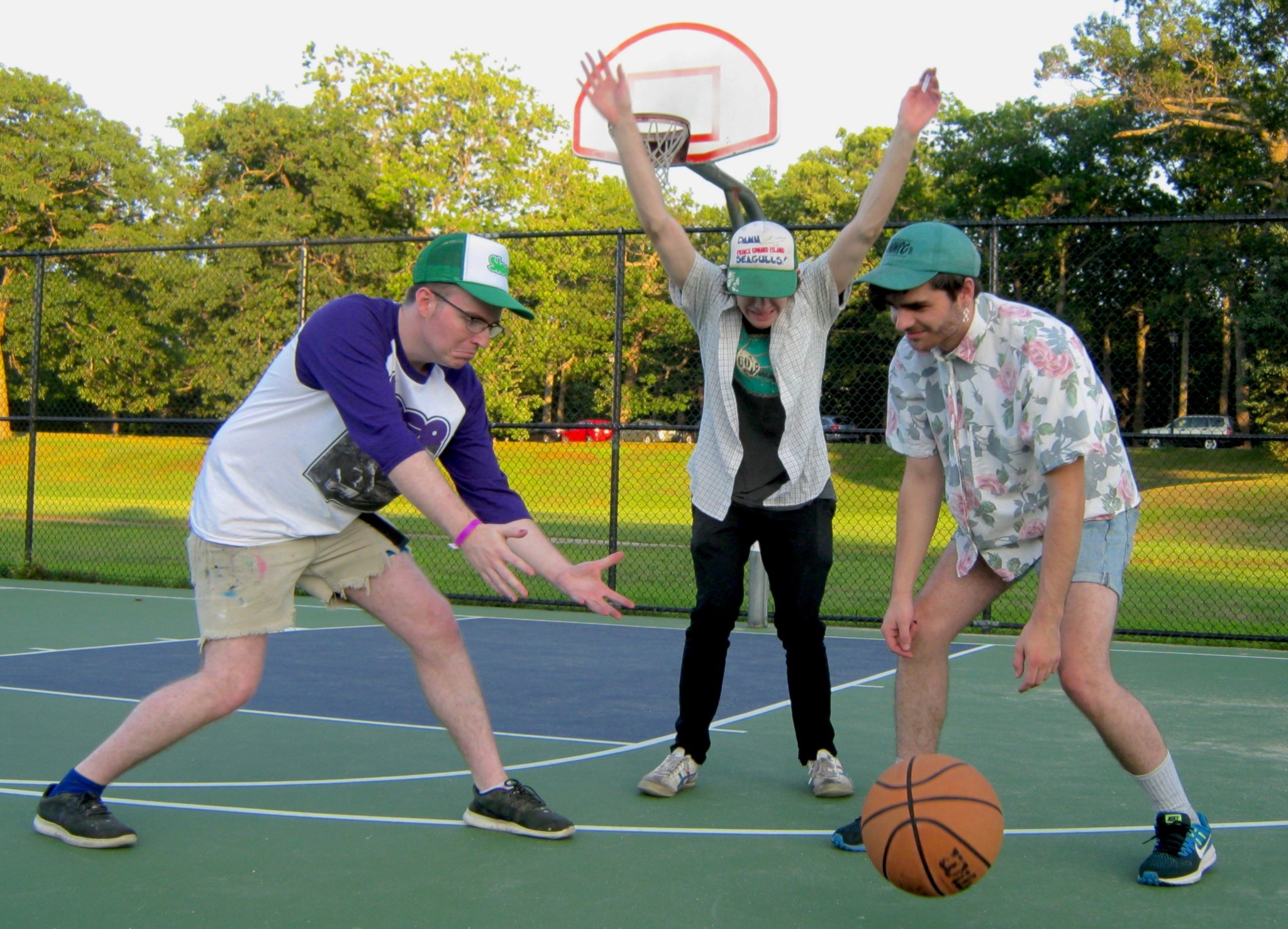 “Go pet a Funyon. Not an onion, a Funyon! Are you dumb?”
- Noah Farwell, in an early version of the Amiright? song "The Onion Song".

I first became aware of Amiright? through an earlier incarnation of the band called Swamp Ass. It was 2015 when they (ostensibly) made their Portland debut, opening for Baltimore-based snail-rock band The Snails at SPACE. Soon after, the name Amiright? began popping up on bills around Southern Maine and throughout the Northeast. The 2018 addition of a full-time bass player turned the duo into a three-piece, andon Sunday, August 5th, Amiright? is returning to SPACE, opening for Jeffrey Lewis and Los Bolts. I wanted to treat the band to something special in anticipation of this special show, so I devised an obnoxiously complicated and confusing game (really more of a fusion of two pre-existing games) and we met up at the Deering Oaks basketball courts on a hot Sunday evening to test it out.

The first player to show up at the courts was co-founding member of Amiright? Quinn Farwell. We shot around a little bit, and they told me that their relationship with basketball ended many years ago after a single fraught season of high school basketball during their freshman year. They scored one point all season (one of two foul shots from the free-throw line).

Next to show up was Noah Farwell, who tore onto the court bringing forth a blast of energy, wearing a shirt and matching trucker hat bearing the logo of the doom metal band Sleep, whom he and Quinn had seen the previous night in Boston. Noah is the other co-founder of Amiright?.

The final player to arrive was Josh Hall, the band's newly-appointed bassist. Perhaps you remember Josh from beloved Portland punk outfit Street Sity Surf. After a brief stint in Philadelphia PA, he’s back and Portland is all the better for it.

My mind is drawn back to the first words Noah spoke upon setting foot on the court: “I love the taste of yellow crayons”. It was this absurd sentiment  that set the tone for this evening’s activity: a game of My Grandmother’s H.O.R.S.E. (that, and the fact that a 2 year old tried to steal Quinn’s phone while I was explaining the rules). The rules to this game can be found at the bottom of this article (they are numerous and complicated).

Without further ado, we present to you the contents of our proverbial Grandmother’s proverbial Trunk (in the order of Quinn, Josh, Noah, Jake, repeating):

Andrew Ring, who plays the drums.
Big Braid, who are very loud.
Caethua, at whose show Noah got a free tape from a different band.
David Scanlon, who once sang the lyric “Most men drink Monster Energy Drink”.
Edgar Clinks, after whose set Quinn got Tony’s Donuts with the band.
Flaming Lips, who simply weren’t very good, in Josh’s opinion.
Gorpho, the singer of which reminded Noah of someone named Sam Ray, both visually and in demeanor.

[Around this time, we all started to lose track of where we were in the H.O.R.S.E. game, but Josh had H.O., Quinn had H, Noah had H, and your humble interviewer/game-master had no letters.]

Happy Jawbone Family Band, who, mere days after the show, were pictured watching someone get arrested for smoking weed at a weed festival in Connecticut.

Id M Theft Able, who at a recent set slapped (and possibly kissed) a greasy pole during his set.

Jeffrey Lewis, after whose set Josh and the band went out for pizza. (why does the name Jeffrey Lewis sound so familiar? It’s because Amiright? is opening for Jeffrey Lewis and Los Bolts this Sunday August 5th at SPACE Gallery)

Lightning Bolt, at whose show a photo of Jake was taken that he has never been able to find.

Nova, an old moniker of Noah’s at whose show Josh met Noah; “they unified and became Joah”.

Oberhofer, who Noah saw at a music festival. Instead of buying any of the merch of bands playing said music festival, he bought a Grateful Dead tee shirt.

Paul De Jong, Jake worked door for that show and Paul was very friendly and cordial.

Quinlan, Francis (of Hop Along), Noah opened for them (sort of). He did poetry with Buddusky.

Radiohead, Josh got lost in the parking garage after the show.

Snowhaus, a sweaty concertgoer threw their sweat-soaked tee shirt at the band mid-set. “There was lots of stomping too, a big thud. We were downstairs in the green room and it sounded like a body dropped. It sounded like PSHHH. And it was so loud, I freaked out, I thought ‘what the hell is happening, is the floor gonna collapse?’” - Noah

Taxidermists, who played the second house show Jake ever threw in his basement in 2013. His dad came down during their set.

Uncle Spudd, they are on tour right now. Noah was excited about this.

[Around this time Noah made an unbelievable shot from a foot behind the three-point-line. Josh had made his way to H.O.R.S. and things were looking grim. Nobody could answer to Noah’s miraculous three-pointer. Quinn advanced to H.O.R., I received my inaugural letter (an H if I remember correctly), and our dear sweet Josh Hall was eliminated from the game, having become a H.O.R.S.E. - excellent playing Josh!]

Virginia (the state), in which Josh played a show with Street Sity Surf at the CD Cellar in Falls Church. [we are aware this is somewhat outside of the initially stated rules but Quinn had to leave in five minutes and Josh was having trouble figuring out a V-band. Cut us some slack, please.]
Wedding Camp, where Noah got hit in the shin repeatedly with a little bench and fell “due to pain”.
Xander Nelson, who Jake saw play in an ensemble at Maine Jazz Camp in 2010 and who is now a DJ on local rock radio station WCYY.
Yonatan Gat, at whose show Quinn did a hand motion from The Sopranos that looks like an inverted horns.
Zero Station, where Josh played a show with Cadaverette.

There you have it. All 26 items in our Grandmother’s Trunk.

1. Each individual game (My Grandmother's Trunk and H.O.R.S.E) shall have no effect on the pace or progression of the coinciding game.

2. The player whose turn it is shall attempt to make a basket from anywhere on the court. If they make it in, all other players must attempt the same shot. If they are to miss, they shall be penalized by receiving a single letter in the word “horse”.

3. While attempting this shot, the player who goes first is also required to name a band or performer (or venue/locality if need be) that they have seen live that begins with the first letter of the alphabet. They must also regale the other players with a short memory or detail pertaining to aforementioned performance.

4. The format of this portion of the game is as follows:

5. Each player, in succession, will:

a. Repeat the performer(s) and experience(s) of the previous players.

b. Add their own experience, the first letter of which will correspond to their turn in the game, ornamented with their own playful anecdote. E.g. “...I will pack [Barry Manilow], [at the concert I met my current spouse].

6. If a player is to receive each individual letter of the word “horse”, they are out of the basketball portion of the game, and must watch from the sidelines, while still participating in the Grandmother’s Trunk portion of the game. ​

7. Upon completion of the Grandmother’s Trunk portion of the game, all players must gather in a circle and list, from memory, everyone’s performer and anecdote collectively, from A to Z. 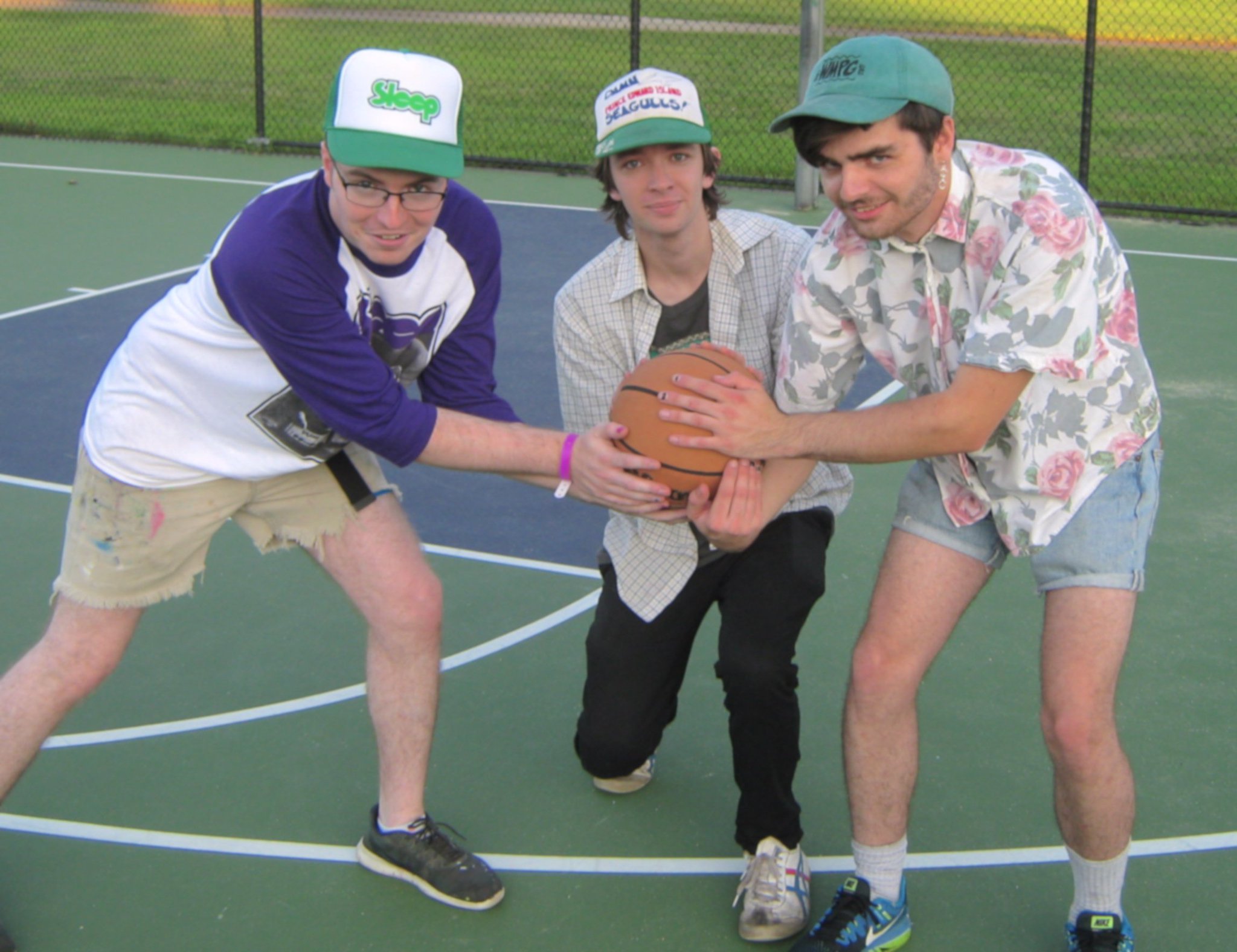 Jake Lichter is the game-master of My Grandmother's HO.R.S.E. and the Summer Music Programming Intern at SPACE.